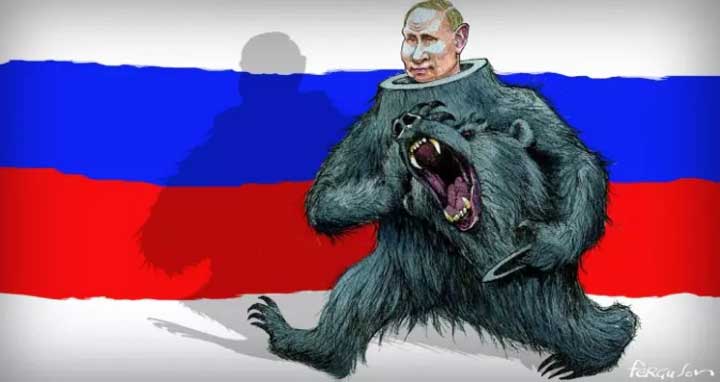 Cordelia Jenkins: Russia’s indefatigable president stormed to victory for his fourth term on a wave of admiration — or by stamping out all opposition, depending on which way you look at it. But in his Sunday night victory speech, given in a frosty Red Square, Vladimir Putin talked about unity. He told a cheering crowd they were part of a ‘big national team’ who would realise his grand vision for the motherland and that he would not be guided by ‘daily political calculations’. Western observers might take some convincing while diplomatic rows rumble on over the deployment of nerve agent on the streets of the UK and the question of Russian interference in the last US election.
But how dangerous is the Russian leader really? Perhaps less so than we imagine, says Gideon Rachman in his column. For while he is reckless, he is not irrational, and history suggests he can be deterred. It may be, argues Gideon, that Mr Putin is willing to take big risks when he believes that the west is not paying attention — Russia’s annexation of Crimea is a case in point. But when he meets clear resistance, he backs off.
While the president’s fans believe him to be a brilliant strategist who can get away with anything, the truth is that Mr Putin is prone to mistakes and makes calculations that often backfire. The result is that Russia is much poorer and more isolated than it should be, whatever the president’s grandiose rhetoric suggests.
Our digital cesspit: The allegation that Cambridge Analytica accessed the Facebook profiles of millions of US voters and targeted them with personalised messages to help Donald Trump’s chances of election show us how connected devices can be abused and polluted to manipulate their users, argues John Thornhill. But before we assign all the blame to internet platforms we should take a look at our own complicity in fanning false news and fuelling a market for stories that stoke disgust and fear.
Pulling strings: The revolving door between EU institutions and the private sector shows the Brussels lobbying industry at its worst, writes EU ombudsman Emily O’Reilly. The problem is more noticeable as Brexit-related consultancy work is booming — the uncertainty around the negotiations provides lucrative opportunities for EU insiders with good networks. Brussels officials are particularly attractive for their detailed and technical knowledge.
Advice to disgruntled centrists: The mood is dark among the UK Labour party’s moderate MPs, says James Kirkup. Exasperated by opposition leader Jeremy Corbyn’s apparent remaking of Labour in his leftist image, they whisper about the creation of a new centrist party. But they are not ready yet. A new party needs a new image, agenda and policies — especially economic ones — to sell to voters. - Financial Times
ABN/Adrian/Jasim/AD