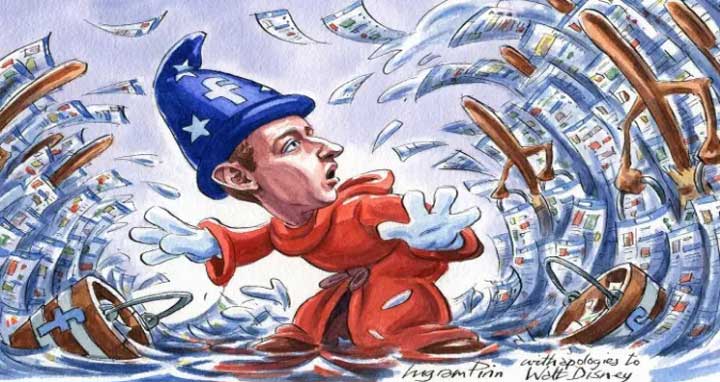 Sebastian Payne: Mark Zuckerberg’s testimony to the US Congress has made for fascinating viewing. The Facebook chief gave the impression of being supremely in control of his vast company, not least thanks to his control of voting shares. But was this the magic of a sorcerer, or the naivety of an apprentice?
John Gapper argues in his latest column that Mr Zuckerberg has lost control of his creation, thanks to the unpredictable actions of Facebook's 2bn users. Fixing the social network’s lax attitude towards personal data is possible with greater effort and honesty, he argues. But reshaping human behaviour is much harder.
Facebook came to prominence by cleverly mixing “strong ties” of relationships (family and long term friends for example) with weak ones (such as casual colleagues). John says it is those looser networks that makes Facebook a powerful platform for wielding influence. Its structure means that good and bad actions can multiply rapidly. So no matter how much Mr Zuckerberg claims he is chastised and will make things right, his company’s future may not be in his hands.
The Middle East after America:
Edward Luce argues Syria shows what the region will look like without the influence of the US. President Donald Trump has little appetite for doing anything in the region, he says, leaving it open to unintended geopolitical consequences.
Mysterious sounds in Cuba:
Anjana Ahuja looks at a rumoured “sonic attack” in Havana and asks whether noise can weaponised. The answer is: probably not.
Rivalry and corruption in Malta:
Alice Hancock visits Valletta and says that the shrine to a murdered journalist exposes the country’s growing pains as it integrates into the EU. Many of the Maltese she spoke to think corruption is rife there. - Financial Times
ABN/Adrian/Jasim/AD