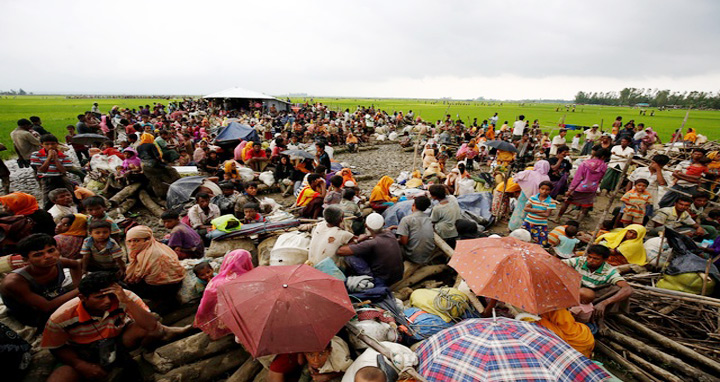 Dhaka, 5 May, Abnews: An eight-year-old girl was killed on Friday in a landslide at a Rohingya refugee camp in Bangladesh, the first of what aid agencies expect will be hundreds of casualties during the monsoon season.

Pre-monsoon showers lashed the refugee camps on Friday after a week of thunderstorms, with strong winds sending some tarpaulin roofs of the temporary shelters housing the refugees flying.

Adiba Begum died after a big chunk of earth fell on her as she walked back from a forest near the Kutupalong refugee camp where she had gone to collect firewood, local police said.

Two children accompanying her were injured and receiving treatment at a Medecins Sans Frontieres Hospital near the camps, the police added.

Some refugees, including young children, walk miles across the camp’s hilly terrain every day to collect firewood to cook the food they receive as relief.

Aid agencies have warned that the monsoons will cause deaths at the camps, which are clustered in a part of Bangladesh that records the highest rainfall.

Bangladesh is working on relocating around 100,000 refugees from risky areas of the camps into safer sections ahead of the monsoons, said Mohammad Rezaul Karim, a government official in charge of the largest refugee camp.

Computer modelling by the United Nations refugee agency (UNHCR) has shown that more than 100,000 refugees will be threatened by landslides and floods in the coming monsoon. The rains typically begin in April and peak in July, the Bangladesh Meteorological Department says.

UN officials say some 700,000 mostly Muslim Rohingya have fled into Bangladesh from Myanmar’s Rakhine state to escape a military crackdown since August last year, amid reports of murder, rape and arson by Myanmar troops and Buddhist vigilantes in actions which the United Nations has likened to “ethnic cleansing”.

Myanmar has denied nearly all allegations, saying it has been waging a legitimate counter-insurgency operation. – Reuters