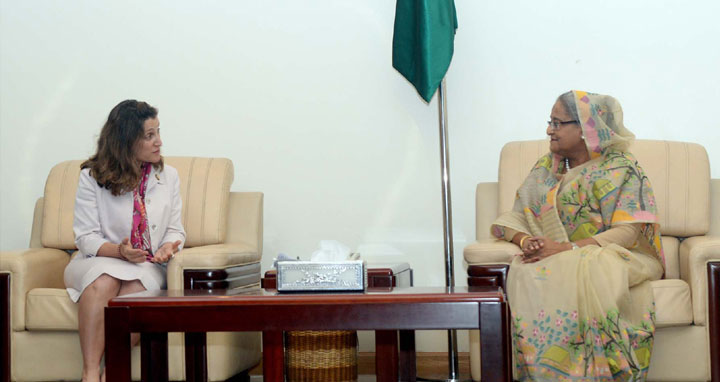 "We admire for hosting more than one million Rohingya refugees by Bangladesh and we are ready to help Bangladesh to resolve the crisis," Freeland said in a meeting with Prime Minister here today.

The meeting was held at Bangabandhu International Conference Center (BICC) following the inaugural meeting of the 45th Session of OIC Council of Foreign Ministers.

Briefing reporters after the meeting PM's Press Secretary Ihsanul Karim said the Prime Minister expressed her worries on safety of the Rohingyas in the coming days as the monsoon is nearing when they could be exposed to other natural calamities including cyclone.

Sheikh Hasina said Bangladesh wants to resolve the Rohingya crisis peacefully through dialogue. As to why Bangladesh initiated talks with Myanmar and reached to an agreement of their repatriation.

"But, Myanmar is not acting according to the agreement," Sheikh Hasina said.

The premier said Bangladesh is also talking with neighboring countries on the issue, which also wants peaceful solution of the problem. She also laid importance on implementation of the Kofi Annan report on Rohingyas.

Sheikh Hasina highlighted the sufferings of the local people for the encroachment of arable land by Rohingyas saying many farmers have lost their occupation for losing their land, forcing the government to give them relief.

The Press Secretary said the Prime Minister raised the demand of Bangladesh for extradition of the killers of Bangabandhu who took shelter in Canada.