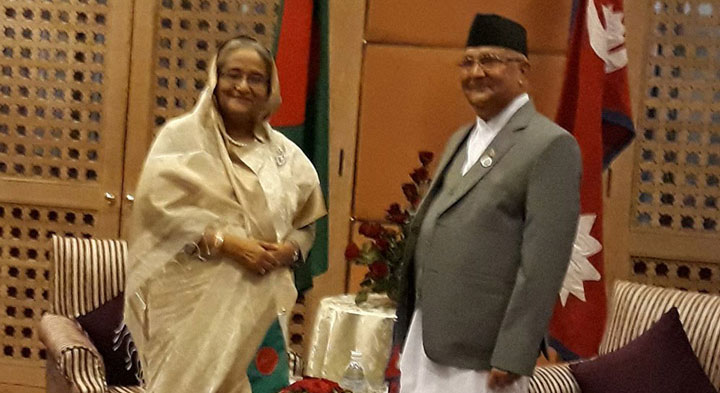 Dhaka, 30 August, Abnews: Bangladesh and Nepal have agreed to enhance bilateral trade and investment between the two friendly countries as well as cooperate with each other for power sector development.
The consensus came at a bilateral meeting held between Bangladesh Prime Minister Sheikh Hasina and Nepalese Prime Minister KP Sharma Oli on Thursday at Hotel Soaltee Crowne Plazza in Tahachal Marg here.
PM's Press Secretary Ihsanul Karim briefed reporters after the meeting.
He said both the leaders discussed the bilateral and regional cooperation as well.
Sheikh Hasina said Bangladesh gives importance to the relations with Nepal and the cooperation between the two countries is very important.
She said the main aim of the countries in this region, especially Bangladesh, is to eradicate poverty. "We don't want our own development only, we also want our neighbours to develop."
Sheikh Hasina offered Nepal to use the seaports of Bangladesh and Syedpur Airport for their business and travel purposes.
Putting emphasis on strengthening the regional connectivity, Hasina said Bangladesh can share its experience in disaster management with Nepal.
She also recalled the Nepalese support towards Bangladesh during the Liberation War in 1971.
Nepalese Prime Minister KP Sharma Oli also laid emphasis on exploring opportunities to enhance the cooperation between the two countries.
In this connection, he mentioned the export of 500 megawatts of electricity to Bangladesh and said a Memorandum of Understanding (MoU) has already been signed in this regard.
He expressed his happiness as Sheikh Hasina came to attend the 4th Bimstec summit at his invitation.
Nepalese Foreign Minister Pradeep Kumar Gyawali and Nepalese Foreign Secretary Shanker Das Bairagi were, among others, present from their side.
Foreign Minister AH Mahmood Ali, Principal Secretary Md Nojibur Rahman, Foreign Secretary Md Shahidul Haque and Ambassador of Bangladesh to Nepal Mashfee Binte Shams were present from the Bangladesh side.
Later, Chief Adviser (head of interim government) of Bhutan Dasho Tshering Wangchuk met Prime Minister Sheikh Hasina at the same place.
During the meeting, the chief adviser informed Sheikh Hasina over the upcoming election in Bhutan.
"According to the constitution, our parliament has been dissolved and the new government will take oath by October 31," said the chief adviser.
The two leaders expressed satisfaction over the existing friendly ties between the two countries and hoped that the relationship will further be strengthened in the days to come.
The Bhutanese chief adviser recalled his visit to Bikramapur in Bangladesh.
Foreign Minister AH Mahmood Ali, PM's Principal Secretary Md Nojibur Rahman and Foreign Secretary Shahidul Haque were present on the occasion.
Later, Sheikh Hasina along with other Bimstec leaders paid a joint call on Nepalese President Bidya Devi Bhandari at Sheetal Nibash, the Presidential Palace, in the capital city.
They also attended a luncheon there hosted by the Nepalese President. – UNB
ABN/Adrian/Jasim/AD