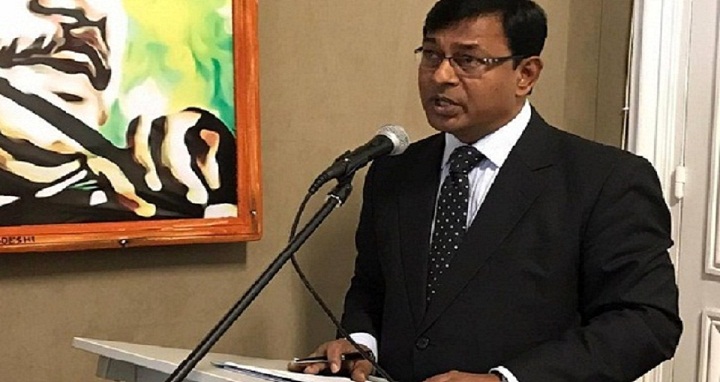 Dhaka, 3 September, Abnews: Bimstec Secretary General Shahidul Islam on Monday said there was no scope to formally discuss the Rohingya issue in the 4th Bimstec Summit held in Kathmandu on August 30-31 as no Member State of the regional body proposed it.
“The Rohingya issue was not included in the agenda of the Summit. So, there was no scope for holding discussions on it,” he said while responding to a UNB question at a post-Summit press conference held at its headquarters.
The Secretary General said there was no proposal or request from any country to include or not to include the Rohingya issue in the agenda.
Shahidul said Nepal prepared the agenda of the Summit as its host which was circulated among the Member States and accepted by all.
He said the Summit was held after a long gap with the hope to strengthen regional cooperation through Bimstec.
“We feel that Bangladesh and Myanmar have shown diplomatic maturity by not raising the issue (Rohingya),” Shahidul said adding that nobody denied the existence of the problem.
He expressed optimism that Bangladesh and Myanmar who remain engaged can resolve the issue.
The Bimstec Secretary General said it is possible to work on the issues on which Member States have a clear consensus.
He mentioned that progress on areas where Member States have consensus should not suffer for the areas where there is lack of consensus. “We will continue make progress on trade investment, connectivity, energy and technology. These should go on.”
Shahidul said the Member States want to continue collaboration though there are differences of opinion in some areas.
He said the Bimstec Secretariat has full confidence in the sagacity and diplomatic maturity demonstrated by the Member States.
The Secretary General said if the Member States can maintain this level of maturity no issue can impede the progress of Bimstec.
Responding to a question on conclusion of Free Trade Area (FTA) negotiations, he said trade negotiations can be very difficult negotiations, and it takes time to get results.
He said the Bimstec leaders renewed their commitment to an early conclusion of the FTA negotiations and expect to conclude trade and goods component within 2019.
They directed the Bimstec Trade and Economic Ministerial Meeting (TEMM) and its subsidiary bodies, including the Trade Negotiating Committee (TNC), to expedite the finalisation of all related agreements on the Bimstec FTA as early as possible, according to the Summit Declaration.
They expressed their satisfaction on the progress of negotiations on the Agreement on Trade in Goods and the Agreement on Customs Cooperation, and also directed the respective ministries and agencies to participate regularly in TNC meetings.
The Member States agreed to revitalise the activities of Bimstec Business Forum and Bimstec Economic Forum to further strengthen government-private sector cooperation for the promotion of trade and investment and task the Expert Group on Bimstec Visa Matters to continue negotiations for the finalisation of the modalities for the Bimstec Visa Facilitation.
The Bimstec Secretary General termed the Summit a very successful one as it reviewed the achievements of past 20 years.
He said they will prepare a follow-up chart on the basis of the Summit Declaration. - UNB
ABN/Adrian/Jasim/AD