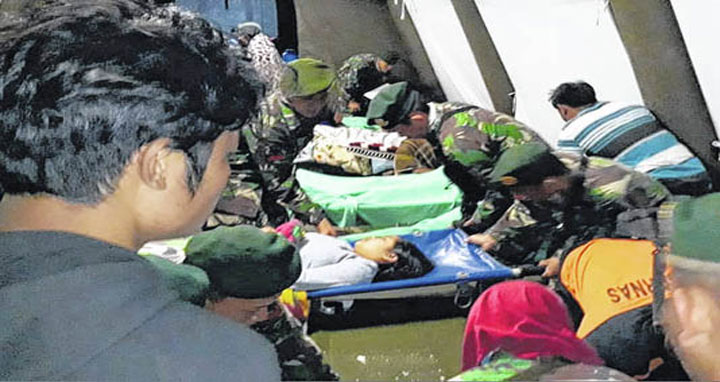 Dhaka, 29 September, Abnews: Nearly 400 people were killed when a powerful quake sent a tsunami barrelling into the Indonesian island of Sulawesi, officials said Saturday, as hospitals struggled to cope with hundreds of injured and rescuers scrambled to reach the stricken region.
The national disaster agency put the official death toll so far at 384, all of them in the tsunami-struck city of Palu, but warned the toll was likely to rise.
Some 540 people were badly injured, it added.
Waves up to 3m (10ft) high swept through Palu on Sulawesi island.
Video on social media shows people screaming and fleeing in panic and a mosque among the buildings damaged.
Strong aftershocks continue to rock the city. Thousands of homes have collapsed, along with hospitals, hotels and a shopping centre.
Rescue efforts are under way, though hampered by a major power cut. The main road to Palu has been blocked due to a landslide, and a key bridge is out of action.
ABN/Adrian/Jasim/AD