None to hold rallies on city streets: Quader | Politics | ABnews24 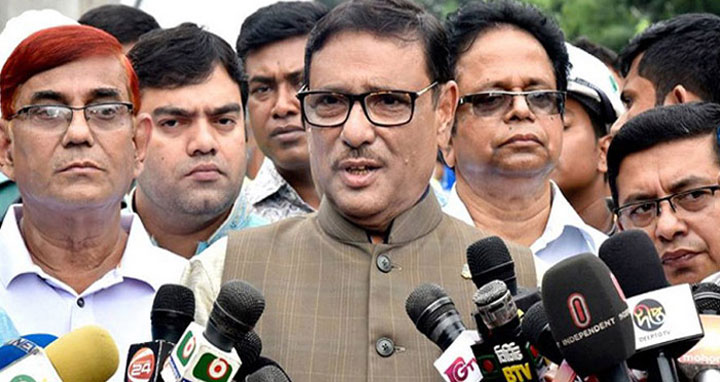 Dhaka, 29 September, Abnews: Awami League General Secretary Obaidul Quader today said none will be allowed to hold rallies on city streets.
“We also would not hold any rally on the streets. The prime minister has opened the Suhrawardy Udyan to all. If necessary we will erect an open stage there and set up microphones,” he said, speaking at a function at an auditorium of National Museum here.
Sheikh Russel Children and Adolescents Council organized the function to distribute educational equipment to students marking the 72nd birthday of Prime Minister Sheikh Hasina.
Quader said police are taking necessary preparations to help the BNP holding its rally at Suhrawardy Udyan tomorrow. He asked the party for not making any drama centering the rally.
Quader said BNP didn’t wage any movement for 10 minutes in the last 10 years. They have no such strength too. Now, they are dreaming of toppling down the government, which is really ridiculous, he added.
He said, “A vested quarter is hatching conspiracy when the country is moving towards under the dynamic leadership of Prime Minister Sheikh Hasina… Bangladesh is now a role model of development before the world.”
The AL leader said the world leaders praised the extraordinary leadership of Bangladesh premier Sheikh Hasina in the United Nations General Assembly. They (world leaders) also expected continuation of the present government, he added.
Prime Minister’s Assistant Private Secretary Saifuzzaman Shekhor, former judge of the Supreme Court Siddiqur Rahman Mian and Major General (Retd) AK Md Ali Sikdar, among others, addressed the programme with the council President Md Raqibur Rahman in the chair. - BSS
ABN/Adrian/Jasim/AD