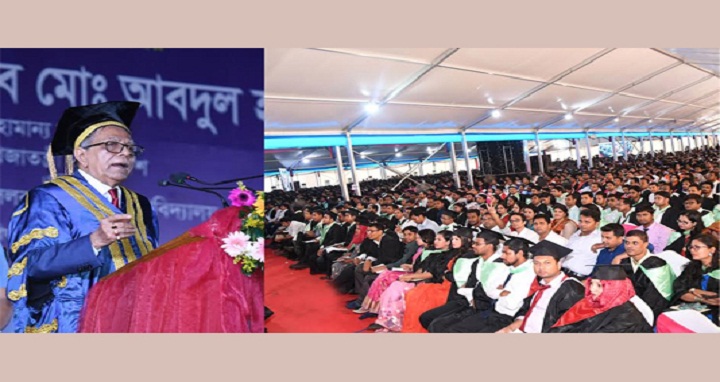 Dhaka, 30 September, Abnews: President M Abdul Hamid today urged university authorities to update their curriculum to keep pace with the standards of world’s reputed educational institutions.
“There is no alternative to ensuring world class education and research to face the challenges of the 21st century . . . So, update the university curriculum to meet the world standards,” he said while addressing the 10th convocation of the Rajshahi University (RU) here this afternoon.
The President, also the Chancellor of the university, urged all concerned not to use education as a commercial commodity and refrain from making it as a tool for certificate-earning only.
Congratulating the new graduates, Abdul Hamid advised them to remember the contributions of their parents, teachers, society, country and people to bringing them to this position.
He hoped that the students would work applying their respective talents, potentialities and wisdom to fulfill the expectation of the nation. He asked them to uphold moral values, conscience and patriotism.
The President asked the graduates not to compromise with injustice and untruth and not to forget this country and its people, wherever they reside across the world.
Noting that the university is a place of flourishing freethinking, he said alongside the academic curriculum, freethinking, discussion on various national and international issues, nation-building activities, contemporary thoughts and cultural practice could help us come out of all sorts of localism and superstition.
“The nation is witnessing negative issues such as intolerance, extremism, militancy and fundamentalism in different higher educational institutions. I think these issues have emerged and flourished due to lack of freethinking and culture practices,” he observed. After the brutal assassination of Father of the Nation Bangabandhu Sheikh Mujibur Rahman in1975, President Hamid said the anti-liberation forces tried to tarnish the image of our longstanding communal harmony through terror attacks by instigating fundamentalism and militancy in the educational institutions.
Mentioning the struggle for independence and liberation war as the glorious parts of our history, he asked the university authorities to take necessary steps so the students and new generation can know the real history of the freedom struggle and liberation war and enrich themselves with the spirit of it.
At the outset of his speech, the President paid respect to all language and liberation war martyrs and Father of the Nation Bangabandhu Sheikh Mujibur Rahman and recalled their contributions.
Education Minister Nurul Islam Nahid, MP, convocation speaker Prof Emeritus Alamgir Mohammad Sirajuddin, RU VC Prof M Abdus Sobhan, Rajshahi City Corporation Mayor A.H.M Khairuzzaman liton, among others, were present on the occasion.
The university conferred honoruary Doctor of Literature (D. Litt) degree on eminent writers Prof Hasan Azizul Haque and novelist Selina Hossain at the convocation. – BSS
ABN/Adrian/Jasim/AD