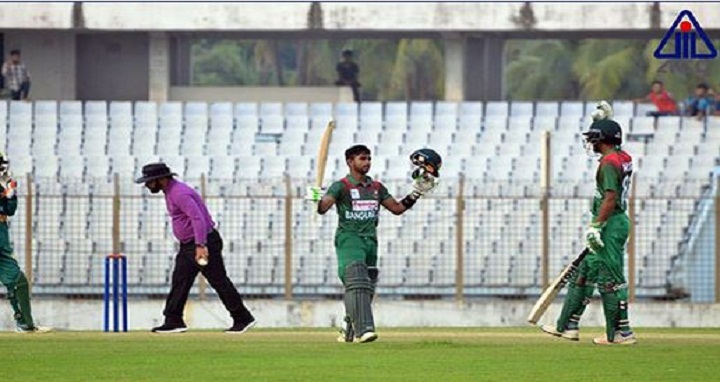 Dhaka, 1 October, Abnews: Bangladesh U-19 cricket team shrugged off their previous match defeat as they bounced back to register a hard-fought three-wicket victory over Pakistan U-19 cricket team in their second group B match of the ACC U-19 Asia Cup held on Monday at MA Aziz Stadium in Chittagong.
Chasing a winning target of 188 runs set by Pakistan, Bangladesh lost their opener Tanzid Hasan early but a solid half centuries from Shamim Hossain and Prantik Nawroz Nabil steered Bangladesh at home with 16 balls remaining.
Middle order batsman Shamim Hossain composed a patient knock of 65-run off 105 balls laced with five boundaries and two over boundaries before being retired hurt. He also involved an important 67 runs partnership with Prantik Nawroz Nabil who contributed useful 58 runs off 93 balls hitting three boundaries.
Shamim eventually had to return to the dressing after being retired hurt. Akbar Ali (17) and Avishek Das (4) completed the remaining formalities to remain unbeaten till the end of the innings.
Muhammad Musa was the most successful bowler for Pakistan as he claimed three Bangladesh’s wickets giving away 24 runs.
Earlier, put to bat first by Bangladesh, Pakistan were dismissed at a small total of 187 in 45.2 overs in the face of tight bowling display by the Bangladesh’s bowlers.
Avishek Das struck early on Pakistan innings removing Muhammad Mohsin Khan but Saim Ayub (49) added two important partnerships first 43 runs with and Rohail Nazir (23) and the second with Waqar Ahmed (67) to take the team to a comfortable position.
But, the Bangladeshi bowlers kept threatening picking up wickets in regular intervals as the Pakistani tail enders failed to stage a fight back in the disciplined bowling attacks by junior Tigers’ bowlers.
Rashid Hossain was the pick of Bangladesh bowlers as he grabbed three Pakistani wickets conceding 53 runs. He was well supported by Shariful Islam who took two wickets giving away 20 runs.
Earlier, Bangladesh lost to Sri Lanka by six wickets while Pakistan posted a nine-wicket victory over Hong Kong in both their respective group opening matches. – BSS
ABN/Adrian/Jasim/AD