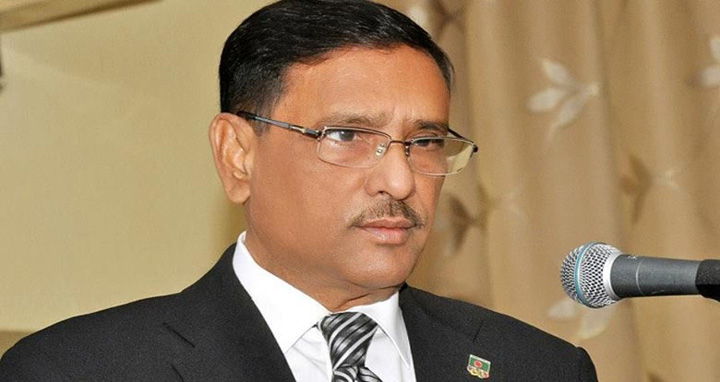 Dhaka, 1 October, Abnews: Awami League General Secretary Obaidul Quader today termed the BNP’s seven-point demands as unrealistic saying that there is no scope to accept those before the election.
“BNP’s seven-point demands are unrealistic and unacceptable, and few are conflicting with the Constitution. Election is not so far. There is no scope to accept BNP’s demand before the polls,” he told the inaugural ceremony of a weeklong mass-contact programme of the party ahead of the parliamentary election at Gulshan-2 kitchen market area.
At a public rally on Sunday, the BNP has announced a seven-point list of demands, including a general election under a neutral polls-time government.
Quader, also road transport and bridges minister, described the demands as unacceptable saying BNP also knew that none will accept such demands.
About BNP’s announcement of movement, the AL general secretary said they will not announce any counter programme with BNP. “Our mass-contact campaign is a very much peaceful one. We will not announce any aggressive programme,” he added.
Quader said if any party wants to create anarchy in the name of political programme, law enforcement agencies will take necessary measures.
The AL general secretary also urged the people to remain alert against the conspiracy of BNP and Jamaat.
He said BNP-Jammaat alliance is out to hatch conspiracy to create anarchy and violence in the country as like as it did in 2014.
Awami League leaders and workers along the people will resist BNP if it tries to unleash any violence in the country, he added.
About the next general election, Quader said his party will achieve victory in the next general election under the leadership of Prime Minister and AL
President Sheikh Hasina, daughter of Father of the Nation Bangabandhu Sheikh Mujibur Rahman.
He called upon the party leaders and workers to work together to ensure victory of the party in the polls.
Marking the mass-contact programme, party leaders and workers from nearby ward units of AL started to assemble in front of the Gulshan-2 kitchen market since morning.
Before the beginning of the mass contact programme, a brief rally was held there. AL Joint General Secretary Dr Dipu Moni, Organising Secretary Barrister Mohibul Hassan Chowdhoury (Nowfel), International Affairs Secretary Dr Shammi Ahmed, Education and Human Resource Affairs Secretary Shamsunnahar Chapa, Central Working Committee members Anwar Hossain, Advocate Riazul Kabir Kawser and Raymond Areng, Dhaka City North AL acting President Sheikh Bazlur Rahman and General Secretary Sadeq Khan were present on the occasion, among
others.
Later, Quader along with party leader and workers carried out the mass-contact campaign in the Gulshan-2 kitchen market areas.
ABN/Adrian/Jasim/AD