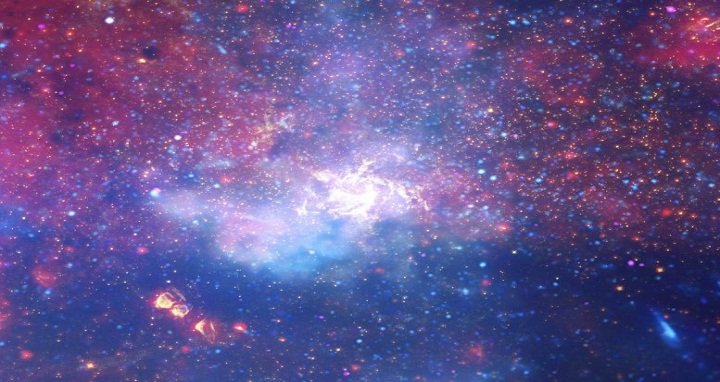 A multiwavelength view of the field around the Milky Way’s galactic center seen from the X-ray (blue) through the infrared (red). Astronomers have measured flaring events at multiple wavelengths coming from the supermassive black hole at the very center. X-ray: NASA/CXC/UMass/D. Wang et al.; Optical: NASA/ESA/STScI/D.Wang et al.; IR: NASA/JPL-Caltech/SSC/S.Stolovy
Dhaka, 6 October, Abnews: Sagittarius A* (Sgr A*), the supermassive black hole at the center of our Milky Way Galaxy, is 100 times closer to us than any other SMBH and therefore a prime candidate for studies of how matter radiates as it accretes onto black holes. SgrA* has been observed for decades and rapid fluctuations reported from X-ray to the near infrared wavelengths (intervening dust reduces optical light signals by a factor of over a trillion) and at submillimeter and radio wavelengths. Modeling the mechanisms of light variability is a direct challenge to our understanding of accretion onto SMBHs, but it is thought that correlations between flare timing at different wavelengths could reveal information about the spatial structure, for example if hotter material is located in a smaller zone closer to the black hole. One of the chief barriers to progress is the paucity of simultaneous multi-wavelength observations.
CfA astronomers Giovanni Fazio, Joe Hora, Steve Willner, Matt Ashby, Mark Gurwell and Howard Smith and a team of colleagues carried out a series of multiwavelength monitoring campaigns that included the IRAC camera onboard the Spitzer Space Telescope and the Chandra X-ray Observatory as well as the ground-based Keck telescope and the Submillimeter Array. Spitzer was able to monitor the black hole fluctuations continuously for 23.4 hours during each session, something that no ground-based observatory is capable of doing, and something that reliably enables scientists to spot slow trends (as distinct from short bursts).
Computational modeling of the emission from the vicinity of a black hole is a complex undertaking that among other things requires simulating how the material accretes, how it is heated and radiates, and (since all this happens close to a possibly rotating black hole) how general relativity predicts the radiation will appear to distant observers. Theorists suspect that shorter wavelength emission arises closer in and cooler emission farther out, with the former produced first and the latter subsequently. A time delay therefore might reflect the distance between these zones, and indeed previous sets of observations, some by this same team, did find evidence that hot, near-infrared flaring preceded the submillimeter flares seen by the SMA. In their new paper, the scientists report on two flares that apparently violate these and other previous patterns: the first event occurred simultaneously at all wavelengths; in the second event the X-ray, near-infrared and submillimeter flares all turned on within one hour of each other, not quite simultaneous but still unexpectedly close. The new observations will be extended with future simultaneous campaigns, and will help theorists refine their still quite speculative set of choices.
Publication: “Multiwavelength Light Curves of Two Remarkable Sagittarius A* Flares,” G. G. Fazio, J. L. Hora, G. Witzel, S. P. Willner, M. L. N. Ashby, F. Baganoff, E. Becklin, S. Carey, D. Haggard, C. Gammie, A. Ghez, M. A. Gurwell, J. Ingalls, D. Marrone, M. R. Morris, and H. A. Smith, The Astrophysical Journal; 864, 58, 2018. – Sci Tech Daily
ABN/Adrian/Jasim/AD