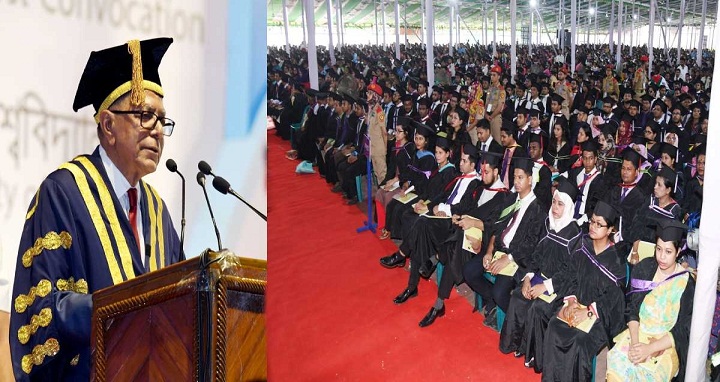 Dhaka, 6 October, Abnews: President Abdul Hamid on Saturday urged the students to play a strong role in nation-building activities as the struggle to build the country is yet to be completed.
“The struggle for freedom has ended but the struggle to build the country has not…the country has not been completely freed from exploitation, deprivation, hunger and illiteracy. The pledge to build a society based on justice and equity is yet to be achieved. So, the young generation, especially the fresh graduates, have to lead the nation-building works from the front,“ he said.
The President said this in his speech at the 51st convocation programme of Dhaka University held at its central playground.
Referring to a statement of the Father of the Nation on the 30th January of 1972 at a ceremony, the President said Bangabandhu mentioned that the struggle to build the country is more difficult than the struggle for liberating the country.
“So, we must engage all of our strength to build the country. Today's youths, I think, will play their respective roles in building the country,” he said adding,
“You’re the future of the nation. The country will be prosperous under your leadership. You have to lead an ideal life. So, don’t compromise with justice. Always keep your conscience awake.”
He said there is a big difference between the current student politics and that of the 60s. Student movements of that time were based on ideals. There was no personal or group interest. The main goal was to liberate the country from the chain of dependence. “With that ideology, we liberated the country in 1971 under the leadership of the Father of the Nation.”
“Wherever you live in the world for life and livelihood, don’t forget the beloved motherland, don’t forget the people who had scarified their lives for liberating the country,” Hamid said.
He said the public universities are giving degrees on different subjects in an unplanned way in the name of diploma and evening courses. “We need to think whether such practice is hampering the normal academic atmosphere alongside the tradition of the universities.”
“University authorities, I think, will rethink about it in the interest of regular students. It should be kept in mind that it’s people who pay for the public universities. Therefore, you’ll have to give priority to their interests,” he added.
“The contribution of this university (DU) in the movement for the development of Bengali nationalism, language movement, struggle for independence, Liberation War and democracy along with higher education and knowledge is unparalleled and unique. After the country’s independence, the responsibility of building the country was largely bestowed upon this university. Therefore, the university always plays the role of leader in fulfilling the aspirations of the nation,” he said.
Mentioning that fruitful participation in creating world-class skilled human resources, innovative thoughts, research and innovation as the key challenges for universities now, the President said Dhaka University is very successful in tackling those challenges despite various adversities.
Praisingthe graduates of the university, the President said the graduates of this university are playing leading roles in different fields of the country and have been contributing to the international arena, too.
The expectation of people from this university in facing the challenges of globalisation and ensuring the rapid development of the countryis very high, he said adding,“All the possible steps should be taken for the overall development of Dhaka University for the national interest and development.”
He said, “The expansion of the important departments should be done keeping the quality unhurt considering the demand of the country and labour market of the world.”
National Professor Anisuzzaman delivered his speech as the Convocation Speaker in the 51st convocation.
A total of 21,111 students registered for the 51st convocation which is the record registration for a single convocation of the University. – UNB
ABN/Adrian/Jasim/AD