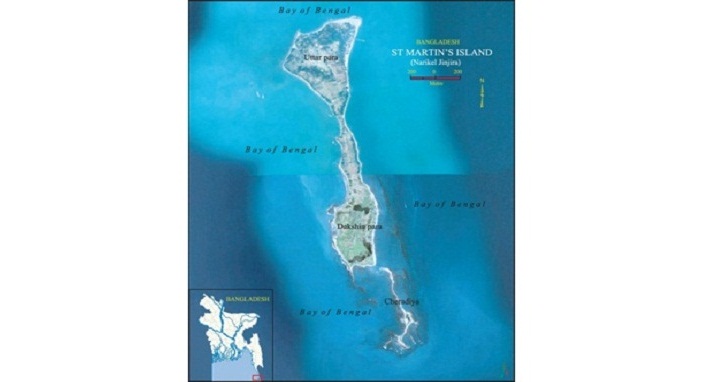 Dhaka, 8 October, Abnews: The foreign ministry today said Myanmar overnight amended partially its newly drawn map tending to show Bangladesh’s St. Martin’s Island as part of their territory.
“They kept the map colours unchanged but removed the population related information about our St Martin’s island that they were showing there alongside the demographic data of their Rakhine state,” foreign ministry’s maritime unit secretary Rear Admiral (retd) M Khurshed Alam told BSS.
He added that previously one could see St Martin’s population information as well as that of the Rakhine state clicking the computer button but no such information was uploaded in regard to the adjacent Teknaf area.
Alam’s comments came hours after he briefed the parliamentary standing committee on foreign affairs ministry about the development in a meeting.
Standing Committee Chairman Dr Dipu Moni presided over the meeting, attended by foreign minister AH Mahmud Ali, state minister M Shahriar Alam, and members M Faruk Khan, Selim Uddin and Begum Mahjabin Khaled.
Myanmar Information Management Unit (MIMU) recently uploaded the map where they drew St Martin’s with the colour they used for drawing the country’s northwestern Rakhine State, tending to depict the island as part of their territory.
The committee suggested the ministry to be active in this matter and to monitor whether Myanmar was uploading such false maps to other websites as well.
The foreign affairs ministry on Saturday summoned Myanmar Ambassador in Dhaka U Lwin Oo and handed him over a strong protest note over the map and demanded an immediate explanation from Naypyidaw about it.
Foreign ministry officials yesterday said Dhaka feared an “ulterior motive” behind the drawing as the St Martin’s was never part of Myanmar or Burma.
A foreign ministry official familiar with the development yesterday told BSS that since the British period and “until now no dispute even raised involving its territorial ownership”.
During the subsequent 1947 partition of India and Pakistan, he said, St Martin’s automatically became part of the then Pakistan and after Bangladesh’s 1971 independence from Pakistan it obviously became its part.
“Bangladesh’s 2012 victory in an international tribunal over the maritime boundary dispute with Myanmar also reconfirmed that the St Martin’s is integral part Bangladesh,” the official said. – BSS
ABN/Adrian/Jasim/AD