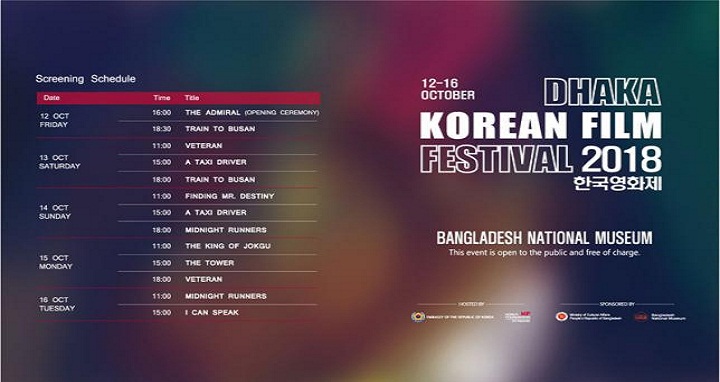 Dhaka, 12 October, Abnews: A 5-day film festival titled ‘Dhaka Korean Film Festival 2018’ has begun in the capital on Friday.
The opening ceremony of the film festival, to be hosted by South Korean embassy in Dhaka, will be held at 4:00pm at Bangladesh National Museum in the city.
South Korean ambassador-designate in Dhaka Hu Kang-il will attend the opening ceremony which will be followed by the premier of opening film ‘The Admiral’.
This year’s opening film ‘The Admiral’ is the most watched and highest grossing domestic film of all time in Korea.
Including the opening film, four of eight movies presented for this year’s film festival are ranked among 10 highest-grossing films in Korea.
The eight films are - The Admiral (opening film), A Taxi Driver, Train to Busan, Veteran, I Can Speak, Finding Mr. Destiny, Midnight Runners, The King of Jokgu and The Tower.
Genres ranging from comedy and drama to crime and action, the movies well represent Korea’s history, society and culture, said the South Korean embassy in Dhaka.
The film festival is open to all and is free of charge. – UNB
ABN/Adrian/Jasim/AD