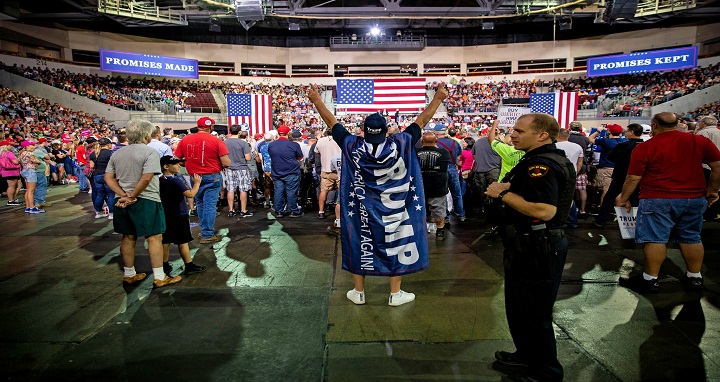 Bret Stephens: Michael Kelly, the legendary journalist who died covering the invasion of Iraq in 2003, once wrote that the “animating impulse” of modern liberalism was to “marginalize itself and then enjoy its own company. And to make itself as unattractive to as many as possible.”
“If it were a person,” he added, “it would pierce its tongue.”
I thought of that line while reading a tweet from Nate Cohn, The Times’s polling guru: “Take everything together, and, on balance, it’s been a good 10 days of state/cd polling for the GOP in a lot of important battlegrounds.”
The “cd” refers to congressional districts, where Republicans now have at least a fighting chance of holding on to a majority despite the widely anticipated blue wave. Even better are Republican chances of holding the Senate. On Sept. 30, RealClearPolitics gave the G.O.P. a lock on 47 seats, with 9 tossups. Now it’s 50 and 6, with races in Tennessee, Texas, and North Dakota increasingly leaning right. Donald Trump’s approval rating is also up from a month ago.
This wasn’t supposed to happen. Not during a midterm when the opposition party almost always gains seats. Not after 21 months of Trumpian chaos. Not after a year of #MeToo. Not after Christine Blasey Ford’s emotional testimony and Brett Kavanaugh’s angry retort.
And yet it is. Predictably. Once again, American liberalism has pierced its own tongue.
It pierced its tongue on CNN this week, when Hillary Clinton told Christiane Amanpour that “you cannot be civil with a political party that wants to destroy what you stand for, what you care about.” And when former Attorney General Eric Holder said Sunday, “When they go low, we kick ’em.”
It pierced its tongue last week when New York’s Representative Jerrold Nadler pledged to use a Democratic House majority to open an investigation into Kavanaugh’s alleged perjury and the “whitewash” investigation by the F.B.I. A party that can’t change its mind and won’t change the subject meets the classic definition of a fanatic.
It pierced its tongue last month when Cory Booker and Kamala Harris turned Kavanaugh’s confirmation hearing into audition tapes for their presidential bids, complete with “I am Spartacus” histrionics and bald misrepresentations about Kavanaugh’s views on racial profiling and contraception.
It pierced its tongue when Minority Leader Chuck Schumer chose to make Kavanaugh’s confirmation the year’s decisive political test, rather than run a broad referendum on Trump’s inglorious tenure. As I wrote in July, the political strategy was guaranteed to hurt red-state Democrats, as they were put “to the choice of looking like political sellouts if they vote for Kavanaugh, or moral cowards if they don’t.”
It pierced its tongue when The New Yorker violated normal journalistic standards by reporting Deborah Ramirez’s uncorroborated allegation against Kavanaugh, and much of the rest of the media gave credence Julie Swetnick’s lurid one. The pile-on wound up doing more to stiffen Republican spines against an apparent witch hunt than it did to weaken their resolve in the face of Blasey’s powerful accusation.
It pierced its tongue when Susan Collins and other female Republicans who supported Kavanaugh’s confirmation were denounced as “gender traitors” in an eye-opening op-ed in this newspaper. Approximately 30 million women voted for Trump in 2016, and many of them (along with at least a few Clinton supporters) surely felt just as Collins did. Are they all “traitors,” too?
There’s more. Maxine Waters urging protesters to hound Republicansout of restaurants and pursue them at department stores and gas stations. A #MeToo movement that moved all-too swiftly from righteous indignation against undoubted predators like Harvey Weinstein to a vendetta culture based on rumors and whisper networks based on self-censorship. Twitter mobs getting people firedand speakers canceled.
Much of this is now making its way into the G.O.P.’s ad campaign for the midterms. That’s natural because the left has given Republicans so much material to work with.
Much of this also merely echoes the uncivil politics that have been practiced by Trump and his followers from the moment he started campaigning for the presidency. But if the most liberals can say for their political tactics is that they aren’t as bad as Trump’s, they are indicting themselves twice — for imitating the wrong model, and for doing it worse.
I write all this as someone who is on record hoping Republicans get pummeled in the midterms — a fitting electoral rebuke for their slavish devotion to an unfit president and their casual abandonment of long-held conservative principles. America desperately needs a party that stands for sanity and moderation, not extremism and demagoguery.
In 2018, Democrats had a chance to become that party. Once again, they’re flubbing it. It’s a pity both sides can’t lose, but maybe a midterm disappointment might teach liberals that they won’t beat Trump in 2020 by out-clowning him.
Bret L. Stephens has been an Opinion columnist with The Times since April 2017. He won a Pulitzer Prize for commentary at The Wall Street Journal in 2013 and was previously editor in chief of The Jerusalem Post. @BretStephensNYT  - NY Times
ABN/Adrian/Jasim/AD